9:00am - the rain was teaming down at the leisure centre and the thought of 3 hours to Glencarse had nobody in a hurry to leave!

After a bit of talk it was confirmed that Charlie had a key for the bothy a decision was made for a direct route via Kirriemuir for supplies.

We set of up the main road but by the time we had gone through Padanaram we had been overtaken by half a dozen horse boxes so a brief stint on the Bogside road we turned up through the Strathmore Springs store and up the wee brae to Maryton then into Kirrie where we saw Pat oot for a walk as we headed for Belles Brae and the Co-op.

Supplies bought we headed for Cadam Wood for a bit of shelter and Kinnordy, Muirhead, right onto the Glen Isla road through Kirkton of Kingoldrum and left round the North side of Lintrathen Loch past Peel Farm and into the Bothy. 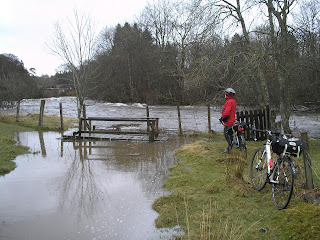 Ron got the fire on and Gus got the kettle and we all had tea!  The rain continued for an hour or so than all of a sudden the sun came out.  We tidied up then headed off but the water had continued to rise and the gate area where David is standing above was flooded out and we had to climb the fence. 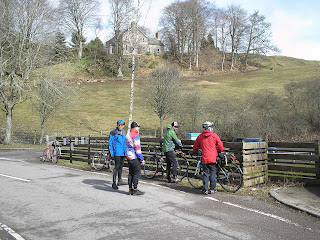 After a bit of discussion we decided to head to Balintore Castle, it took a few stops to change clothes on and off we headed towards the castle. 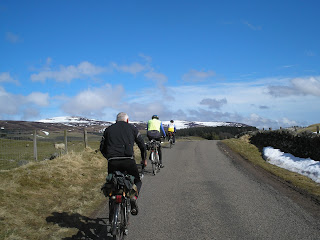 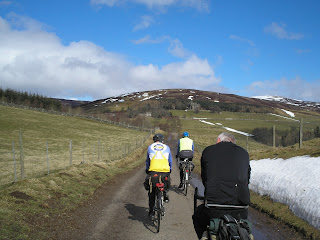 It was a wee bit cooler by the time we got to the top so another stop to put on more kit before the descent. 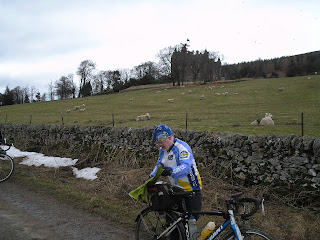 From Balintore we we had the wind behind us as we headed for Pearsie then onto the Clova Rd for home.  The last mile was hard into the wind as Charlie and Gus vied for the front approaching the toon, Charlie taking it on the line. 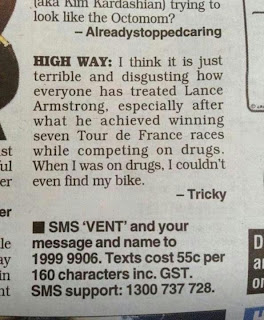