With the clubroom still under repair from the flood we met in the Osnaburg with the club treating the membership to bacon rolls, tea & coffee - not something we could have in the clubroom.

Ron and Mary had previously announced that they were standing down as president and secretary so a change of leadership  was the main order of the day.  Charlie was nominated and accepted the position as President and Brian Batson moved from Vice President to Secretary and Raymond Moug is the new Vice President.

The rain had stopped and it was a nice mild day by the time we headed off from the Littlecauseway.  Ardler was the planned destination and we headed along the Bogside Rd at a gentle pace until the first of two punctures gave us a wee rest. 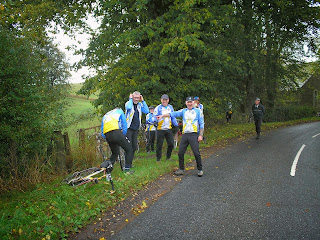 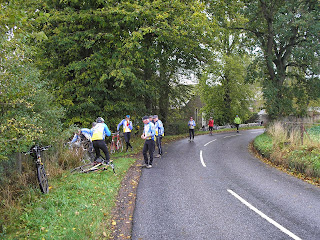 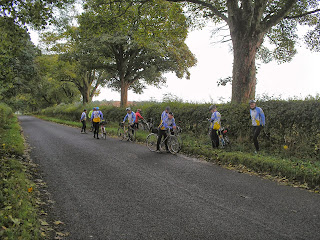 It was getting to opening time and there was a distinct change in the pace after the second stop.  The main group was just nearing Ardler when the breakaway 2 came back to us with the news that The Tav was not serving food today so a quick discussion on a new venue resulted in the Belmont Arms being chosen as the new venue.

We hadn't been there for a while so it was a welcome change. The Belmont Arms has gone through many changes over the years and is now back in the hands of the Kinpurnie Estate, if you have £1.5 M in your back pocket it could be yours along with 50 acres!

The bar staff set up a table for us and the food was fantatstic!  We headed back out into the sunshine for the 17 miles home at a steady pace getting back into Forfar just before four oclock.  A good day out!