Another bright sunny Sunday, all be it cold and breezy welcomed us to the Forfar Leisure Centre for  the run up the hill to the Glen Isla Hotel.

Six of us headed off, Brian being the first casualty off the day coming off on some black ice  in the car park, thankfully both Brian and his bike were OK and after dusting himself down we headed on the main road to Kirriemuir.  We had our first flurry of snow in Kirrie just as we turned left for Glen Isla at Viewfield.  We were into the wind virtually all the way, the flurry of snow disappeared then came back with vengeance as we climbed the brae at Purgavie and was pretty heavy by the Sawmill, by that time we all had stopped to dawn full water proof body cover with the President and Secretary bloused out at Dykend to go to Peel Farm leaving just David, Gus, Ron & for the remaining seven miles or so to Glen Isla.

By the time we arrived the roads were white and it it was showing no signs of easing off, thankfullt there was a roaring fire to warm us up and we had a cracking bowl of soup, it was good to see the place fully booked with the new owners making a big effort to squeeze us in. 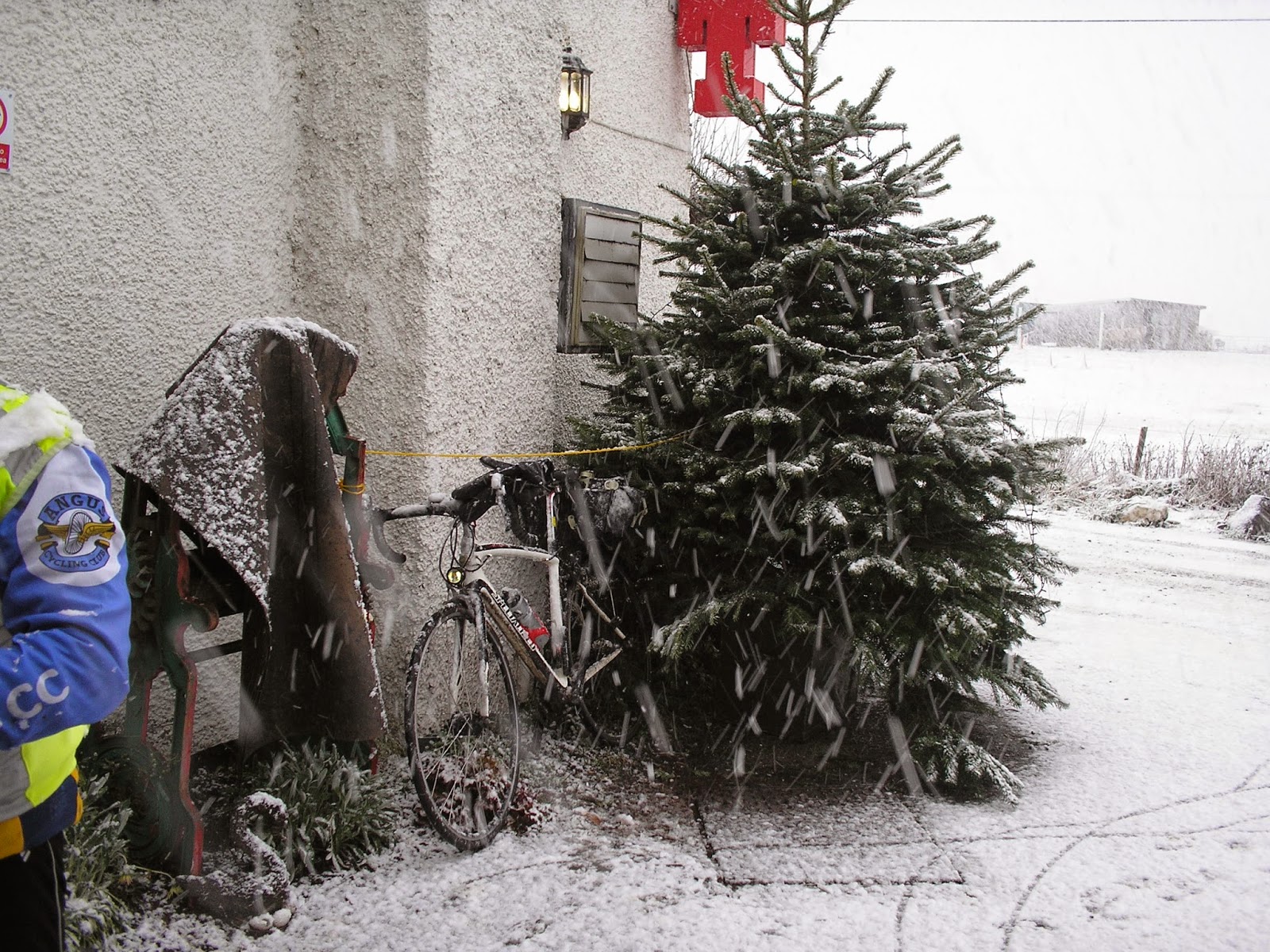 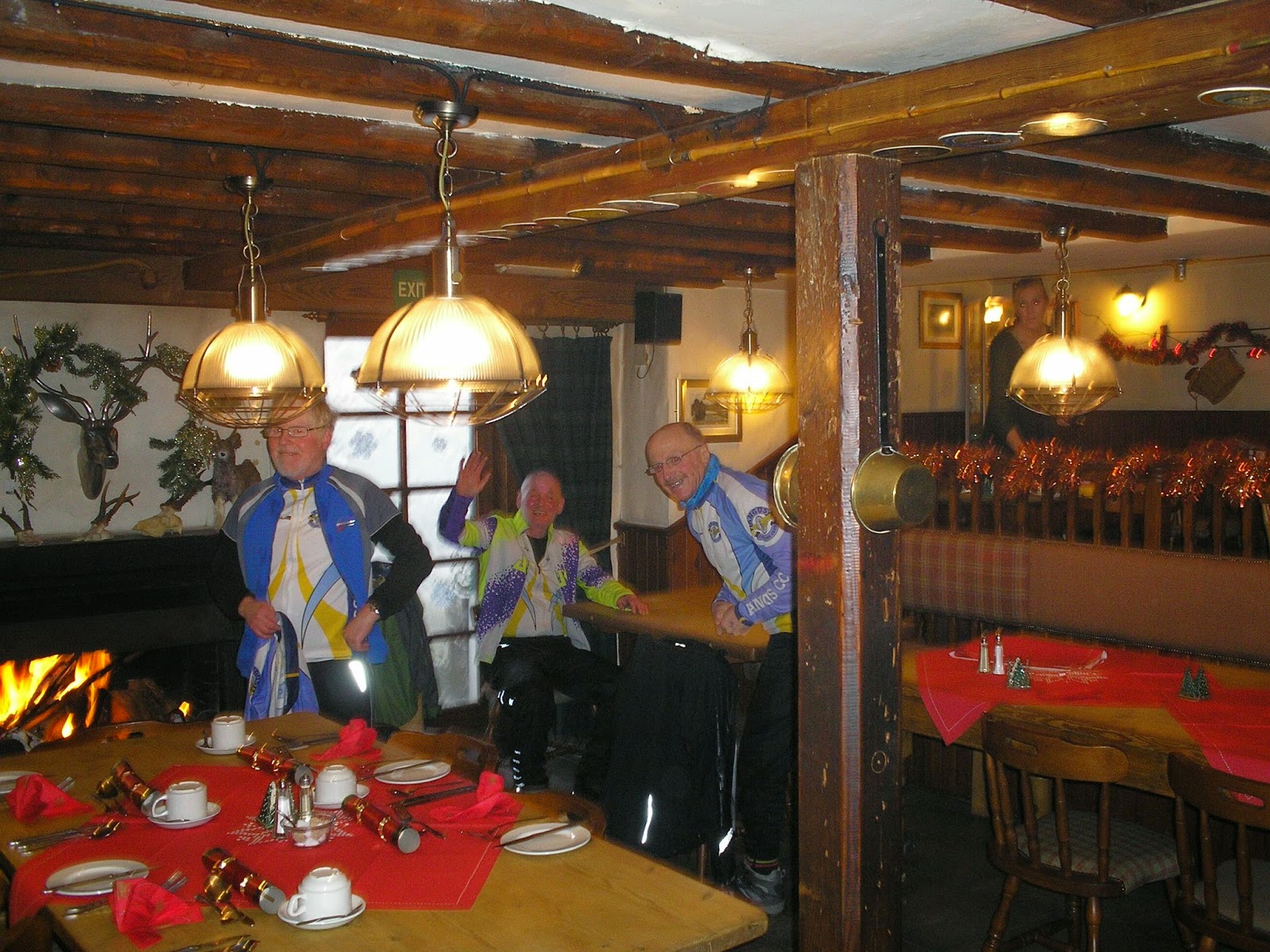 The first seven miles backdown to the lower levels at intrathen were slow, the tyre tracks in the snow were turning to ice making conditions slippery and we saw a few cars getting caught out with the conditions.  We all made it with no falls and the rest of the way was just slush and with the wind behind us we made good progress sticking to the main raod all the way back into Forfar.

Next Sunday is the Mince Pie Run to Tom & Mary's, with the group leaving from the Leisure center at 10 with a rendezvous time of 12:30ish.

Six of us set out from the Leisure Centre with two and a half hours to get to Newtyle just 10 miles along the road.  It was a beautiful day, cold but no wind and sunshine.

The original plan had be to head towards Auchterhouse which was to involve a 400m stint on the A90 but the sun was so low and bright it would have been dangerous on the bend so we opted for the Bogside Road and a a trip to Alyth where we had a brief stop for David to get some supplies.

From Alyth we headed for Tullyfergus and the Hill of St. Fink, we hadn't been up that way for a couple of years and we had all forgotten quite how long it was, steep only at the beginning but a bit of a drag, the view from the top was worth it though, we could see virtually the whole of the Strathmore Valley.  The long slow descent took us into Rattray where we headed left and took the direct route to Newtyle via Ardler with only a brief stop for Charlie to put some air in his tyre.

We arrived spot on 12:30 where we were reunited with Ron & Derrick who had spit off for coffee before Alyth along with big Stewart who had come through from Blairgowrie.

The second run worked well and The Commercial had excellent soup at a good price with friendly fast service, we stayed for quite a while and split up into different groups for the journey home, the temperature had dropped and the wind had picked up a little and blew us gently towards Forfar all except Stewart who was heading in the opposite direction with thoughts of also going up the Hill of St. Fink on the way home.
Posted by Unknown at 13:28 No comments: