Another fine Sunday in Angus saw eight of us head on a round about route to the Glencarse Hotel. We headed towards Glamis and took a left up the hill towards Dundee climbing up to cross the dual carriage where Keith turned for home leaving the rest of us for a wee down hill respite towards and through Tealing before taking an unusual left down Emmock Rd into Strathmartine.

In Dundee we had a bit of climbing to do again but it was early and the roads relatively quiet, we took a right up Harestane Rd, Laird St to Clatto Park, down to Camperdown Park across the bridge over the dual carriage way working our way along the Coupar Angus Rd with a tight right at the roundabout we snaked our way down to South Rd and along to Invergowrie past the Lynch Centre.

Crossing into Invergowrie we were then on national cycle route 77 towards Perth, this gave us a respite from the hills  with 12 miles of virtually flat cycling apart from a short climb through Errol to Glencarse where we stopped for lunch at 36 miles.  It was pretty much chicken noodle soup and sandwiches all round washed down with a pint of something cold! 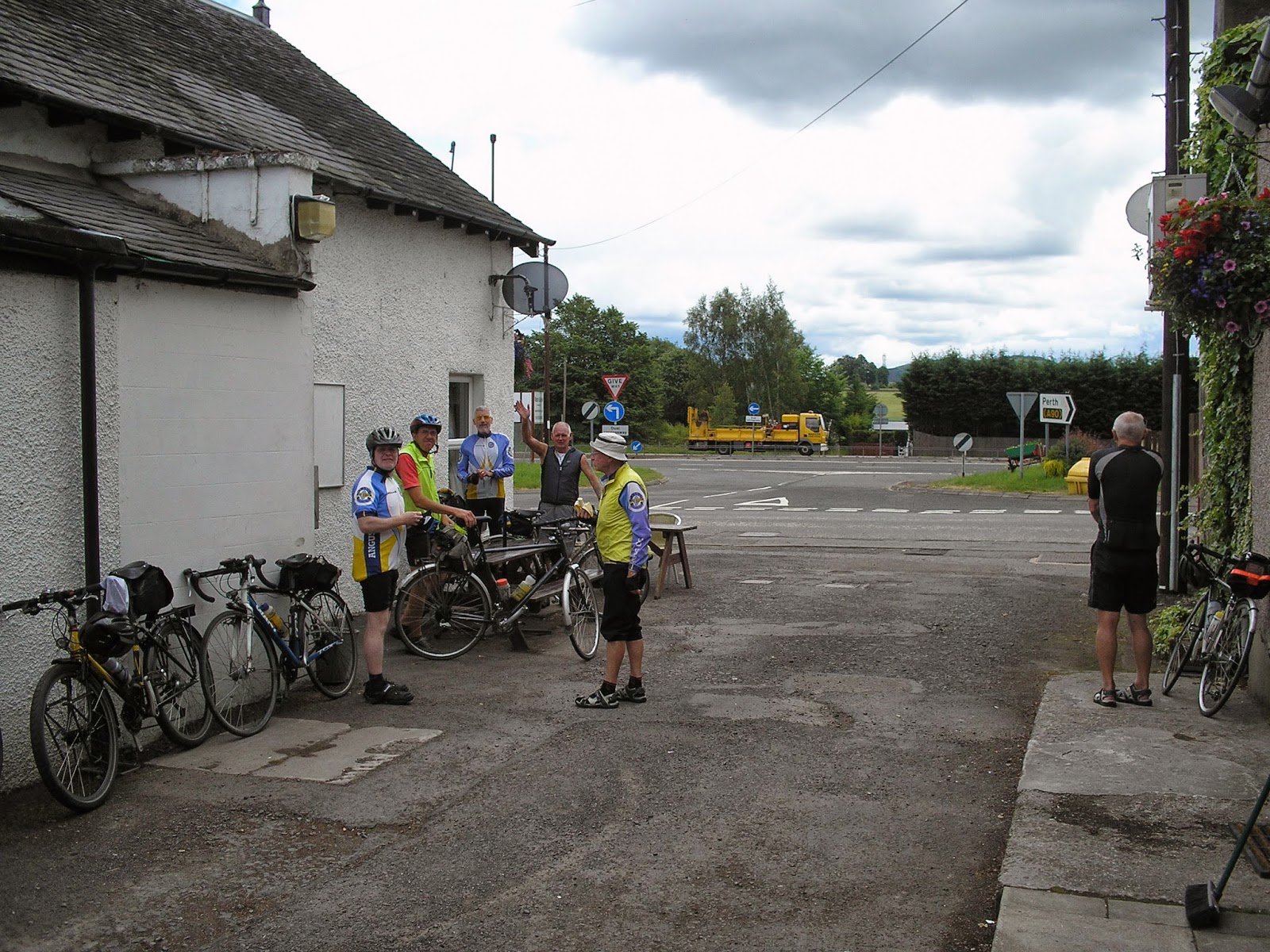 From Glencarse we faced a stiff climb up to Kinfauns where were met by a 20% sign, we took a right up towards Murrayshall and onto the A94 Perth Forfar Rd, we weren't on it for long as we turned right at the MacDonald Arms and back towards Forfar.  We zipped along at a good pace and there were a few dry mouths as we passed The Tav in Ardler which was shut for the second day in a row.  With Ron being out for the whole day and going back to Kirrie we went through to Miegle and then onto the Bogside Rd. 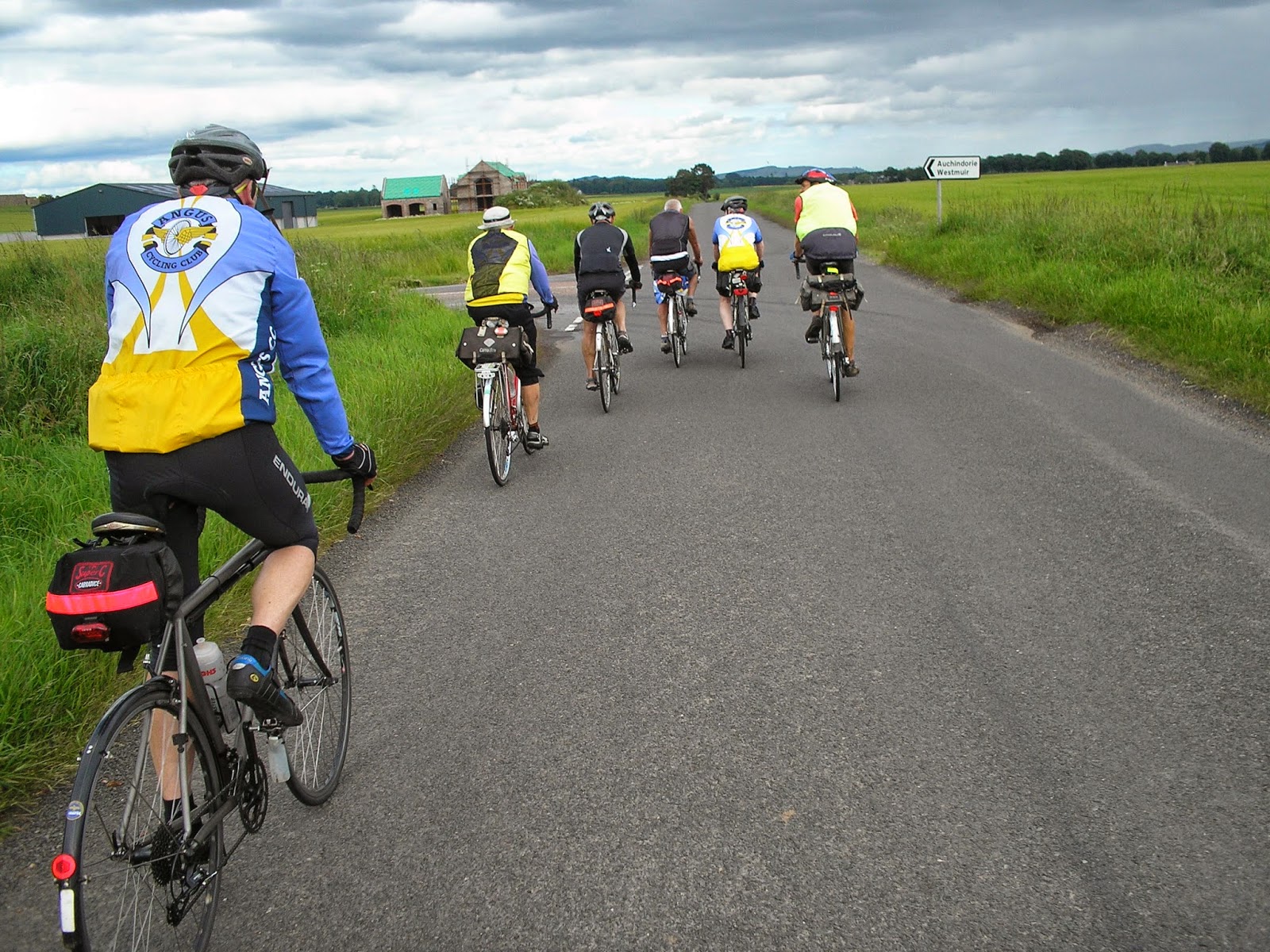 The pace was pretty steady along the lumpy road and as we got to the Glamis Rd Ron took a left up the Glamis Rd heading for tea and a well earned beer leaving the six of us to the last 6 miles back into Forfar, 73 miles and just under 300' of climbing.  The route is here if you fancy it!

Next week is the Bothy Working Party Weekend and the start of the Tour so no Sunday run as such, the following weekend the run is to Falkland on Sunday the 13th of July, for those wishing to loin us at the Tay Bridge Cafe, we should be there about 10:30 - 10:45 for a bacon roll.

Six set off on a bright morning for a longish gentle run to Dunkeld.

We took the Bogside Rd to Miegle then the main Perth Rd to Coupar Angus and then through to Blairgowrie.  From Blair we continued on towards Dunkeld on the main road which was quite busy  so we turned left the bottom of Loch of Clunie and this was quieter till we got to the Loch of the Lowes where it was pretty manic at the car parking area for the osprey hide, we got through with Charlie nearly being knocked off by someone trying to pass him on a corner with a car coming in the opposite direction - we regrouped in the lay-by deciding on the co-op and a seat outside for lunch.

Lunch purchased we headed down to the river and luckily there were two empty benches for us. 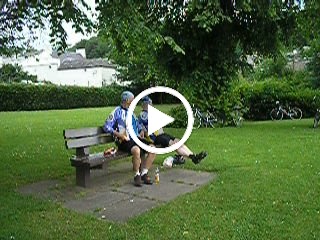 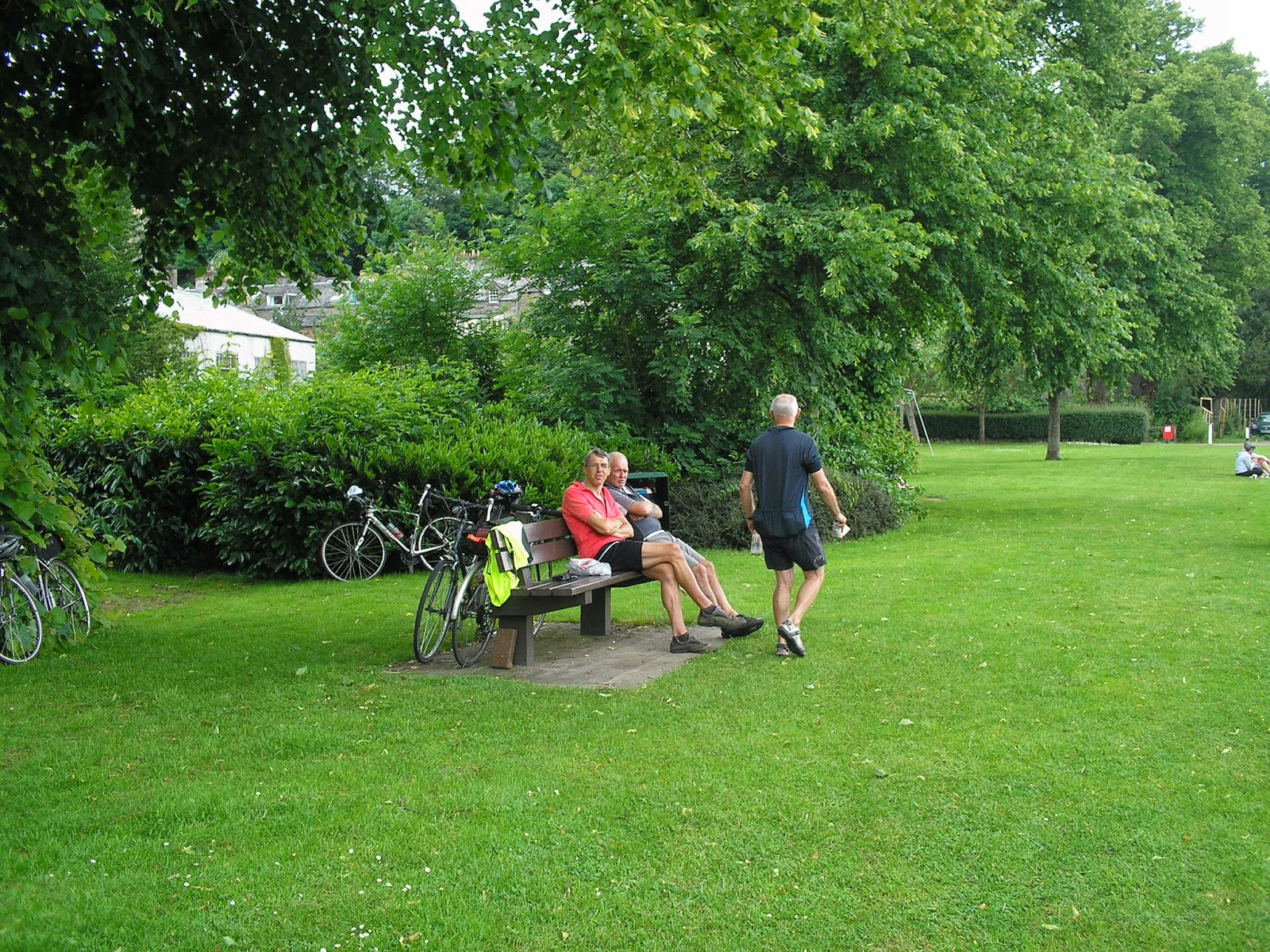 After a wee rest we decided on a run up the hill past Murthly Sawmill, that gave us a nice run mainly down hill through Murthly towards Kinlaven Bridge where we did our ususla right then left and the lumpy route back into Coupar Angus.  Nobody fancied stopping sow we headed towards Newtyle and home, six out and six back into Forfar and 65miles completed.