Colleagues, please find attached pictures from the recent club weekend. We stopped at a bunkhouse just outside Peebles. The eleven participants enjoyed a ride organised by David Husband along  the Megget and Talla reservoirs in the Tweedsmuir Hills. The weather was good and the company was even better.Brian Batson
Secretary (Angus Cycling Club) 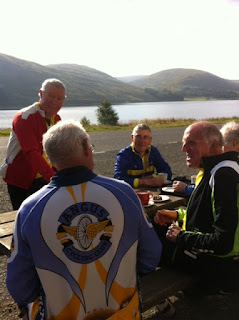 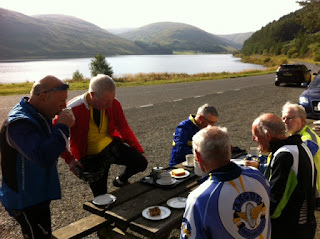 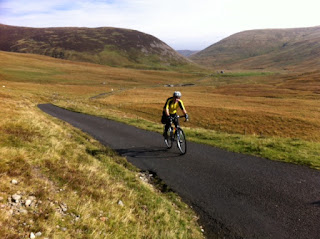 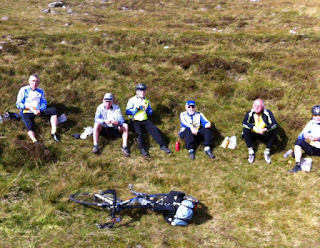 Gus was waiting with a cupee when I arrived  at the Lochside Leisure Centre followed shortly after by David, discussing the route for the day it became evident that Dave & Gus had done the Sunday run on Saturday but were happy enough to go back to the Glen Isla Hotel by a different less hilly route.


We were heading off when Tom arrived with a flat, his second for the morning so after much faffing  we headed for Kirrie via Craig OLoch Rd and Turfbeg taking the dirt track down to the A926 which we followed to Kirrie at a decent pace  turning left onto the Glen Isla Rd where we took another left onto the Alyth Rd an a right down the hill to Melgum Water followed by the long hill  and drop down to Bridgend of Lintrathen where we re grouped before heading past Peel Farm and the Bothy then taking a right to Kilry Hill.  Regrouping again at the top discussion was had on how to fill the time to get to the Hotel for 12:30, Auchavan was the outcome past Forter Castle, a wee dead end rd which neither Gus nor I had been up before.

We headed back to the Glen Isla Hotel, which is great to see busy again, for a good lunch washed down with some tasty ale and the company of a cyclist from Pitlochry who was also enjoying a good day out.

With the majority of club members away in Peebles for the annual weekend away and others away for CTC trips and school holidays it was only Charlie and I who met at the Leisure centre, with Charlie needing back we decided on the 30 mile Careston loop and set off in cold but bright sunshine up towards Horneycross then The Drovers and round in that direction.

On the high road past Noranside the sun warmed up and a brief stop to take off some layers was the only stop and we returned in good time.

There is now a new 'open' group in Facebook Angus Cycle Club, feel free to join.

Inchture is on next Sunday - I am away so no update then the AGM at 9:30 am in the clubrooms followed by lunch in Ardler - all welcome on the 18th
Posted by Unknown at 06:09 No comments:

Hopefully back up and running, or should that be cycling, with new a MacBook Air after my iMac gave up the ghost.

We have been fortunate with good weather on the Sunday runs  and we have had Tom from Alyth join us along with Chris from Kirrie who had seen the publication of the runs list with the cycling festival prompting him to come along.  Though the addition of the 10 o'clock short runs did not have the desired effect of getting potential new members out there were two well attended runs so not a complete loss.

The new runs list has been published and deliberately kept short to attempt to encourage more people out.

September is generally a good month and we try to put on a couple of longer runs, this year Pitlochry,  glorious day and well attended with six members heading ff in the sun, I turned back to take the short run but as nobody turned up did the route in reverse to meet up with David and Charlie and get n a good 95 miles. 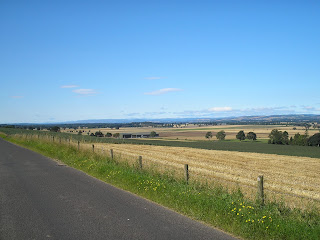 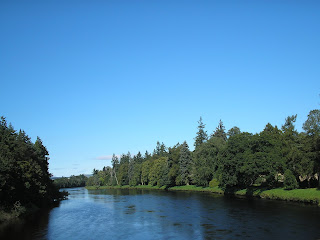 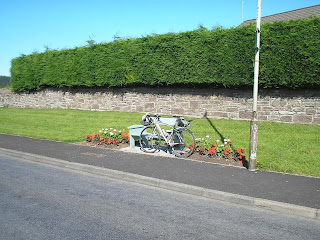 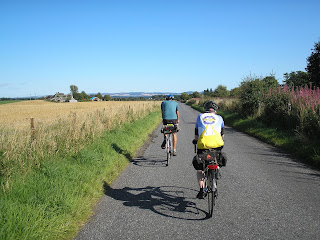 Stonehaven the following Sunday saw four of us, David, Gus, Charlie and I  head for Brechin, Montrose and the coastal road as far as Inverbervie where we had a wee stop at the catering van before turning inland past the Grassick Gibbon Centre a road on which neither Gus or I had been on before, Charlie led the way along some interesting back roads on the way to Little Brechin, from Careston we got a draft from a JCB, 8 miles at 22 miles an hour was grand the a relaxing run into Forfar. 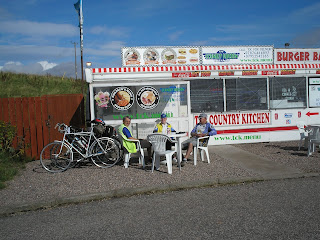 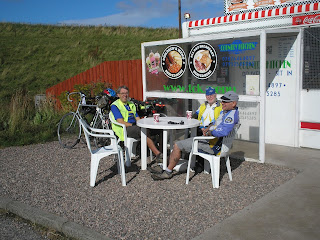 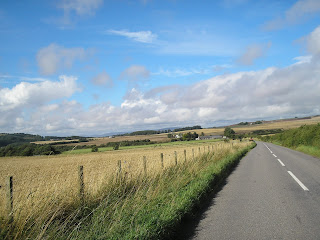 Glen Clova saw both the long and short group meet at the hotel where we always get a great lunch  I took the short run group up, five of us headed up to Ron and Pat's where Derek headed to the Bthy to meet with Ron and go to the Tav for lunch, Raymond headed for home leaving Norman and I to continue to Clova where we met with the long group who had been round Prosen first and took Chris for his first outing, on the way back a wee group of us were dehydrated so stopped in one of our favorite watering holes - The Drovers  before rolling down the road to Forfar. 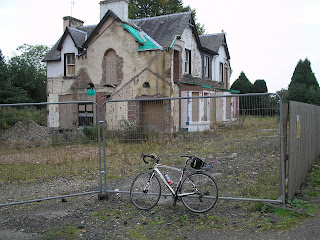 The last run of the month was another rendezvous ride to the Tav in Ardler with both groups again meeting for lunch, this time sitting out in the sunshine enjoying free scones and butter courtesy of big Jim's kitchen with good bowls of soup and fine pints of beer before we headed back to Forfar via the Bogside Road with Chris turning up to Kirrie. 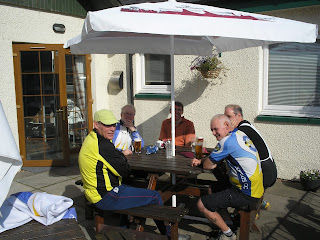