Six headed out on a driech day from the leisure centre, looking to shelter from the wind we headed over Dunichen Hill, a fair climb but it got us out of the wind for a wee bit.  From there it was the back road all the way to Arbroath.  Ron and Gus turned off half way, the former had spent 13 hours struggling in the wind round the Deeside loop yesterday with David H.

As we approached Arbroath the sun was threatening to come out and the constant drizzle was beginning to ease, we turned left past the now defunct cycle world and headed round the industrial estate to St. Vigeans and the short steep brae, much worse when you start it a 1/4 of the way up.  We headed up to National Route 1 past the Medowbank Cafe passing the ever expanding new houses on the edge of Arbroath and as we turned left we got the wind behind us.

The rain was off and the sun came out briefly and it was a pleasant run along the coast through Lunan and up the hill where we stopped for a brief break. 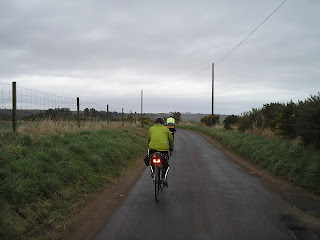 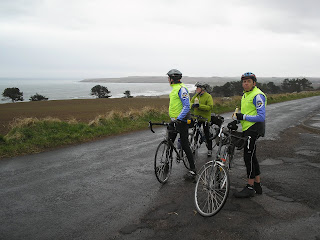 Heading down the long hill towards Montrose we could see the town covered in a huge grey cloud and as we turned left into Ferryden we got a proper soaking!

A brief stop to collect some grub and we headed for Duncan's house  where we had the usual good conversation and banter over some warming coffee, sausage rolls and biscuits. It wasn't looking great as we thought about heading out  and Duncan had some spares to part with and after a bit of bartering Charlie got a light weight crank and Norman some spd pedals.

We had decided on a route up through Hillside of Montrose and as we started up the long gradual ascent the sun finally came out properly, so it was off with the waterproofs for a push which lasted a good 5 miles before we descended towards Brechin.

We turned through the golf course and followed the road through to Little Brechin and on towards Careston, just before Memus Charlie turned for home leaving Norman David and I to head for refreshments at the Drovers. 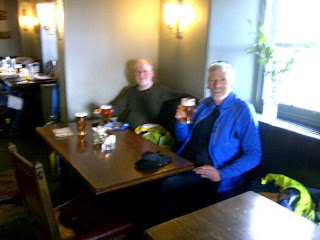 A quiet run down the hill into Forfar gave us just over 60 miles for the day, the route is here if you would like to follow it round.

Next week it's the steep hills of Prosen followed by Glen Clova and potentially the Drovers on the way home for a pint!
Posted by Unknown at 14:35