It's been about three months since we last visited the Clatterin' Brig at the foot of the Cairn O' Mount and as we set of from Forfar it looked like it might rain and there was a northerly wind to impede our progress.

Laurencekirk was quite busy for a Sunday morning as we weaved along the High Street before turning left down Station Road heading for Auchenblae and climed through Drumtochty Glen past St Palladuis Church, described as a fairy tale church with part of the original structure dating back as far as 1244 and Drumtochty Castle 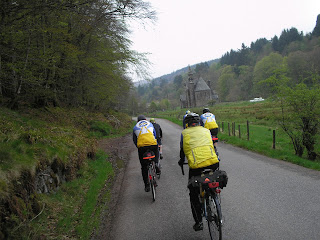 On the final steep descent Charlie's rear brake cable snapped, we had covered just under 40 miles climbed 1800' and were ready for lunch, you get a grand feed in the restaurant and it was busy with cyclists.  We had a good break and thankfully David had a full set of cables in his bag so Charlie managed to change the cable and we were soon heading for home. 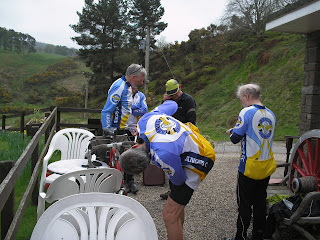 The sun was out and we had the wind behind us and were making good progress, but it wasn't Charlie's day as he hit a pothole we had a brief stop to get things back together before heading through Fettercarin and Edzell and turning for Memus and the Drovers.  It clouded over a wee bit on the way but when we arrived Gus, David and Charlie headed straight home  and Norman and I stopped for a couple of liquid refreshments.

On the way home we met up with Grahame Steel and his family out for a couple of hours in the sun.  We arrived back in Forfar  we had covered 68 miles the route is here if you want to try it